In the first week of 2019, I came across Liam’s reading list of 2018, which featured a bit more than a book per week. My own –if I may use such grandiose of a term– pile of books read in 2018 was 4 high (one of which was, I regret to inform you, Atlas Shrugged.) I called for a crisis meeting with confidante Anna, where we (maybe it was only me, I’m sure Anna was already aware) realized the obvious: Even if you get to read 50 books a year, it’d take years to plow through the hundreds upon hundreds of books on our to-do lists.

Inspired by Liam’s blogpost and the crisis meeting resolution plan to attempt 50 books in 2019, we both set out to do the unlikely. I’d probably not be writing this if I failed after only a couple of books in, so in a way I already gave it away: we both reached our goals! Here are some observations and conclusions that I think might be interesting or useful to others that are in similar situations.

One thing that helped me to get going was to read less difficult books. Given I already read a lot for my research (which is theoretical chemistry), I think it’s just too ambitious (for me) to also consume complicated or technical writings before going to bed or while riding the bus. Consciously ‘avoiding’ non-fiction and primary literature helped me a lot to overcome this hurdle and get into the habit of reading regularly. I’m not saying that you shouldn’t attempt complex literature but if it blocks you from reading anything at all, it’s worth reconsidering. Es ist noch keine Meisterin vom Himmel gefallen.

Another “trick” was to put down books that didn’t catch my attention right away-ish. I did this only a few times because I found that the books I chose were all capturing my spirits well enough.

I basically just scroll through my to-do list and start reading what catches my attention (which, as we will see below, was not without consequences). I’m lucky enough to be a bit of a genre fan (‘lucky’ because I suppose the selection process for non-fans might be a tad more difficult in times of cluelessness) so if I don’t know where to go, I can just consult the list of joint winners of the Hugo and Nebula awards (my clue is my genre). It’s not the most elegant process but I was rarely disappointed by the entries. 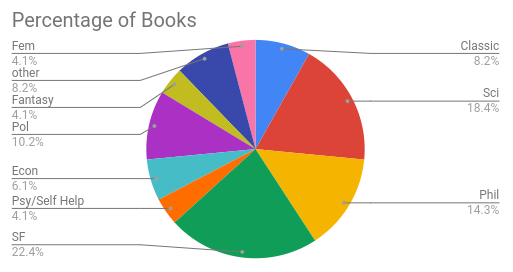 It was quite hard to classify the books by genres. Making the classifications too narrow resulted in too many different genres and setting them too wide (which is what I did here) results in some inaccuracies. You can verify for yourself how daft I was with certain classifications, but it’s more for myself to get an overview.

In the middle of the year, I compared my reading list with Anna and she was immediately like ‘you are reading a lot of dudes, huh?’ and I oof’d hard because it was totally true (see list below). Many literary genres are (still) very much gender biased.[1][2][3] De-biasing my own to-do list means introducing a female quota, which is a topic Anna and I have discussed a lot and generally agree, but is still a tricky issue: It shouldn’t be, that a quota undercuts womxn’s achievements (e.g. ‘only’ getting elected because of a quota and thereby undermining actual competence). Or sometimes gender should not necessarily be moved to the center of attention in works that don’t aim to be gendered per se (woman qua woman). Aware of these caveats, a reading list can definitely benefit from some nudging/de-biasing to the right direction. The arbitrary way of selecting new books to read outlined above is of course not arbitrary at all but heavily shaped by who I am and the privileges society associates with my identity. I look at it in the following way: The intuitive/’random-gut-feeling’ selection process is a manifestation of the (here white patriarchal) society I was raised in and the overriding urge to de-bias the reading list is a (feminist) reflection on said society that counteracts it. Introducing female authors into a reading list is an act of de-biasing prevalent norms I disagree with. 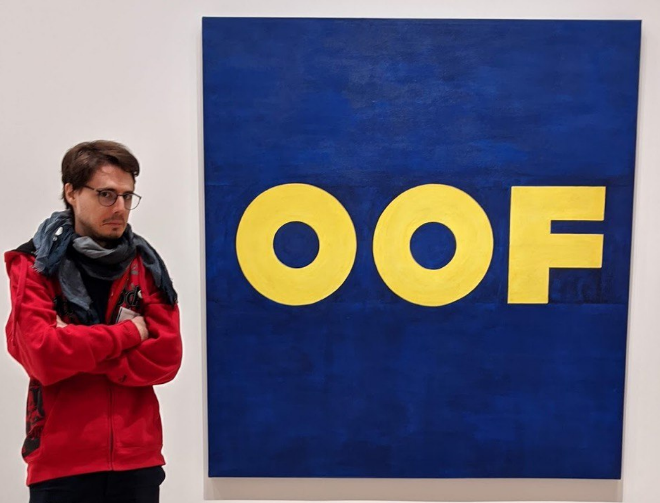 Half of the authors in the second half of the year were female, so the de-biasing worked out quite well on these terms. One final observation on that: Certain types of books are easier to gender-swap than others. There is no real alternative to the ‘genre’ ‘Chomsky’. Sure, contentwise (for Chomsky: political analysis), there are plenty of alternatives, but it seems that certain authors are more of a genre themselves. People might read Chomsky qua Chomsky and not qua political commentator. For more genre-centered literature (like SF), it was easier to just seamlessly swap out male for female authors, because I might be more interested in SF-topics than the actual author (SF qua SF, to use ‘qua’ one last time). I hear the quick-witted gender-sceptical from the back say: “But if the author is not important, why even bother to de-bias according to gender?” My answer is this: Just because the SF-topic/story is more important to me than the author, does (fairly obviously) not mean that the experiences of an author has tremendous influence on how a story is told or how characters are built (early Asimov’s women are very different from e.g. Ann Leckie’s), which can in itself be a worthwhile goal.

Most of the points above illustrated for womxn hold for non-white people (generally of European descent) and (other) minorities in literature, too. On one hand, since I am European, I’m very interested in the corresponding canon of literature, on the other hand, I find a global perspectives (especially how colonialism destroyed a huge deal of [potential] literature) also very important. One caveat here is to not fall for some exoticist trap (an interest in something because it is exotic rather than what ideas have to offer) but I hope my genuine interest helps preventing that. I will try more to pick books by non-white/noneuropean authors next year, since you see that my list is very, very white this year.

I applied for and won a small ‘grant’ from the Swiss Study Foundation to hold a reading group called ‘Afrofuturism 3030’ next year, where we read Okorafor, Butler, and Jemisin (see my list). It is of course a bit weird to have a white guy organize such a reading group, but I think I didn’t steal the (general) grant from someone else (there is only about 1% people of African descent in Switzerland) and we’d rather have a ‘white’ Afrofuturist group than none at all in my optinion. Staying close to the source and inviting outside opinion on it will help make this as educational and interesting as possible.

Some more sceptical friends immediately asked “50 books, … I mean, what do you define as a book?” I think that’s a silly and ill-targeted question. I’m not trying to read 50 book because it’s some sort of magic number or to show off. If I failed in Feburary and only read three books, it would have been already worth it. The goal is of instrumental nature to get me started. Some of the books are small novellas (Binti Trilogy) or longer essays (Rothbard), others are actual tomes (oh my Dune). But since I like numbers anyways, I tracked it all and I think I can actually say that I’m not cheating since on average the books had 297 pages with a standard deviation of 150 pages. The median is at 304 pages. That results in about 1200 pages each month. 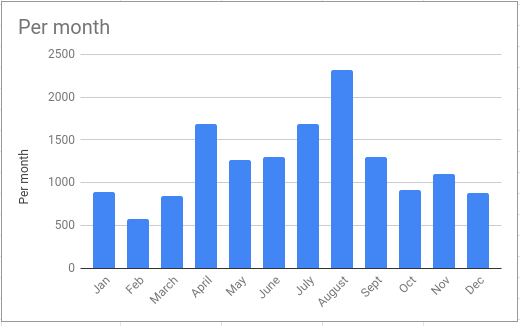 What it did for me

This year felt ‘intellectually’ very good. Starting with my PhD program probably helped a bunch but I can’t emphasize enough that there really, actually is enough time to read. I’ve worked a lot for my research yet not spending hours and hours on Twitter or playing games gave me room to read. Not every book taught me something long lasting or had a groundbreaking idea in it, yet the overall endeavor just felt right. I will probably decrease the amount of books a bit next year and try to grapple with some more ‘difficult’ readings. It just felt great to actually achieve the 50 books and fulfill probably the first New Year’s resolution ever for me.

The ratings are very qualitative and not normalized at all. I thought about writing mini-reviews for each book but I think there is enough out there and the process I delineated above felt much more interesting to me to write than actual reviews. I highlighted 4 books I really enjoyed (never mind the inconsistent rating, haha!)

If you like Goodreads (a website that tracks your reading and ‘looks like it hasn’t been updated since 2009’ (Anna)), you can check out my account. I read many books on my phone and on the computer screen. When I bought them, I tried supporting local bookstores rather than Amazon. Concluding, I hope I could spark some motivation to take up a book you always wanted to get through in 2020!

Thanks to Anna for reading through beforehand.